Mr. Fairbrother urged Council to approve the RUA, suggesting Council had little choice on this matter.  Mr. Fairbrother opined that approval was the only course of action that gave the County some control over the use of its roads and compensation for damage.  Mr. Fairbrother also informed Council that time had run out as WPD recently went back to the Ontario Energy Board to restart the process to sidestep the RUA and proceed without municipal approval.  He warned that if approval was not given at this Council meeting the opportunity for a RUA would likely be lost for good.

County residents including respected lawyers Garth Manning and Alan Whiteley of CCSAGE-Naturally Green as well as John Hirsch, an appellant in the ERT proceedings, proposed a number of preferable alternatives to entering into a road users agreement with WPD.  However Mr. Fairbrother argued that none had merit.  Mr. Fairbrother also spoke against proposals from councillors, including a proposal to approve the RUA but to post-date when it would come into effect, a proposal to request an extension from the Ministry of the Environment and Climate Change in order to take into account the extended ERT hearing and a motion to defer the RUA (defeated in a recorded vote of 11 to 4).

APPEC Chair Gord Gibbins took to the podium to point out the serious issues with laying underground collector and high voltage transmission lines on Maypul Layn Road, a designated heritage landscape.  Mr. Fairbrother dismissed those concerns as well, noting that property owners could take up any issues they might have with WPD and that the County would not need to get involved.  Apparently the County solicitors’ work is done as long as WPD abides by the terms of the RUA and does not attempt to do any blasting.

Based on our experience with WPD we are concerned about the possible consequences of the County signing on with this firm, which has exhibited such disrespect for the community.

APPEC and John Hirsch continue to fight WPD head on, often on a daily basis with motions, affidavits and evidence, most recently to stop WPD from clearing vegetation at its proposed project site.  APPEC and its supporters to Save the South Shore are fighting through the Environmental Review Tribunal and the Courts to stop this ill-conceived project from being constructed.  Your continued support is essential to continue this fight and to our ultimate victory.

Pictures from the March 31, 2016 Committee of the Whole meeting where the WPD Road User Agreement (RUA) was discussed and deputations provided. Details are in an APPEC email to it’s members. 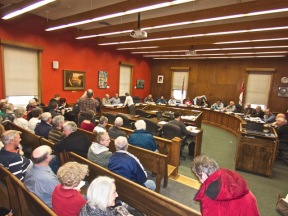 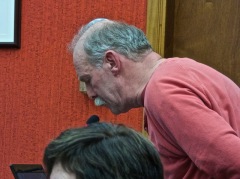 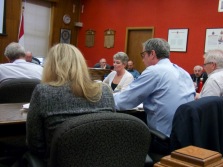 My Fellow Colleagues, I send you this message as my feelings and opinion on the agenda item we will deal with this Thursday about wpd, the following excerpt are my thoughts.

I urge you to agree with me that we don’t have a choice but to turn this motion down. I have fought for years to keep turbines out of the County, recognizing early on how badly they would affect everything we hold dear, not to mention our economy, our tourist industry and our property and business values. The contrary spin of the wind industry is professionally and effectively done but – please don’t for a moment believe their avaricious approach and intentions. We are now the “go to” destination in Ontario by those in the know. To approve these motions will eventually drive these well motivated and well – paying visitors away; it would also reduce property assessments and thus tax revenue. It would turn our paradise into a grubby factory, the end of a heartless string of turbines stretching from Wolfe Island through Ernestown and Amherst Island to our south shore. An indiscriminately as it spins and devastating to some of the most beautiful vistas and country side in Canada.

Over the years I have introduced and supported the not -a-willing – host moratorium and most recently the support of Wainfleet motions . I am proud to say that I was instrumental in forming the Wainfleet working group traveling up and down the 401 , meeting with Provincial Cabinet Ministers, challenging the Premier at every opportunity, being rejected because it’s before the courts.

I believe as deeply and as strongly as any man can that we have to stand up and say “NO MORE!” I cannot act contrary to those feelings or to sell my soul for what I feel is Blood Money.

We are men and women of principle and on principal and in our own best interests and those of our constituents let us act. I refuse to have my legacy seen as the Mayor who was a party to turbines in the County and in accepting what can be seen only as a bribe and you as Councillor’s should feel the same. “Community Benefit Fund” – my foot.

To accept these agreements would strengthen wpd’s position before the ongoing ERT. There are several deficiencies in the agreements . But above those considerations is the sheer arrogance of wpd in bringing them forward as if the ERT had not turned thumbs down on their 27 turbines at its first hearing , and the fact that it’s REA doesn’t exist or at best is in suspense until the second hearing has taken place. And this coupled with its statement that it was starting work. Arrogant and Greedy beyond belief.

I am also proud of my values instilled in me by my parents that I am a principled individual and I will not risk that treasured value in respect for them.
My Fathers favourite saying was ” You’ve got to stand for something or you’ll fall for anything”. I want no part of them nor of their bribe and I urge You to join me in voting a resounding “NO WAY” on Thursday.

Please call me if you would like to discuss.
Respectfully submitted
Your Mayor
Robert Quaiff

Approving a “Road Users Agreement” at this time is premature and could result in unnecessary and irreversible damage to the natural environment of South Marysburgh and Athol.

We have now fought a costly and lengthy legal battle through the Environmental Review Tribunal for two adjacent wind energy projects along the south shore.  The Tribunal for the White Pines project found that the site was poorly selected.  This Tribunal also found that the construction of the access roads, crane pads turbine bases and the upgrading of municipal roads would cause serious and irreversible harm to the Blanding’s turtle.  A similar decision by the Tribunal in the Ostrander Point Wind Energy case found that the entire habitat of the same population of turtles would be irreversibly harmed.

It is the opinion of our two groups that Council should not abandon its control of County roads and its responsibility for its natural heritage. In requesting an agreement to cover 25 years plus two 10 year extensions equalling 45 years of occupation on the South Shore, wpd’s promises of future restoration of this wildlife habitat are meaningless.  At the same time wpd has announced its intention to immediately remove trees, shrubs and other vegetation in the way of its construction plans.

When County Council rejects these Agreements and announces that it will await both Tribunal final decisions affecting County lands before taking further action it will be showing the leadership that its constituents expect.

Our organizations stand ready to provide any information on the Tribunal rulings that you may require in your deliberations. 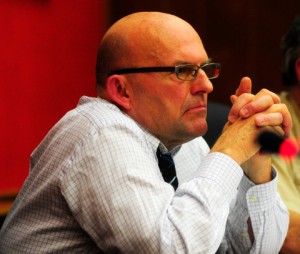 Prince Edward County is joining 58 other municipalities in supporting the Township of Wainfleet’s resolution to Premier Kathleen Wynee asking the province cancel the request for proposal for added wind power generation.

South Marysburgh councillor Steve Ferguson put the resolution on the floor stating the Electrical System Operator has indicated that they want to provide additional contractors of renewable energy.

“Time is of the essence, Ferguson said indicating he has heard that some of these projects may include the County. “We could be looking at a White Pines 2.”

North Perth Councillor Warren Howard appeared before the Committee of the Whole yesterday seeking support in principle for a bylaw that would uphold the rights of municipalities to regulate wind turbine noise. Mr. Howard represents a working group of representatives from 21 municipalities that aims to form a coalition to fund this initiative.

Mr. Howard is asking Council to consider a financial contribution towards costs to draft the bylaw and defend it in court. The amount is at the discretion of Council but the goal is to collect $250,000 or more from all coalition members. Municipal Planning staff will report back to Council with its recommendation in May.  Please click here to read the deputation made at Council on February 13th.

Quinte News has quickly responded with an on-line poll that asks:

“Do you think Prince Edward County council should donate money and join a coalition to create stricter noise regulations that could serve [to] control wind farms?”

Please click on the link provided and cast your vote.

Let’s send a strong message that we fully support the rights of municipalities to regulate wind turbine noise.

This entry was posted in PEC Council, Political, Uncategorized. Bookmark the permalink. Edit

The following was an APPEC News posting that occurred last April 23, 2013. APPEC News:  County Not a Willing Host  This evening Council declared the County “Not a Willing Host” of wind energy projects.  Councillor Quaiff’s motion passed 11 to … Continue reading →