As per the notice to our members and a special investigation by Global News that was based on Freedom Of Information (FOI) acquired by Wind Concerns Ontario (WCO), the MOECC have not been investigating complaints on wind turbine noise in Ontario. This has been covered in a two part series by Global News. In the event you were not able to see the Global News airings on May 31st and June 1st, here are the links to Part 1 and Part 2.

Additionally, the concerns were brought up in the Ontario Legislature Question Period. Here are links to the Legislature Question Period video as well as the text where questions were raised.  And if you would like more detail, click on the Response to Wind Turbine Noise Complaints Report to view the detailed report created from the vast amount of emails and information collected after 2 years of WCO persistence to acquire the FOI.

If the WPD Canada White Pines Wind Project is to continue with the 9 remaining wind turbines around the Milford area in South Marysburgh, it is estimated that 500 people will be within 1500 metres of a wind turbine and may be in the same position as the many residences who made complaints in the following projects: 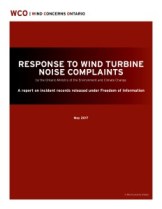 Global TV will be airing a hard-hitting story on wind turbine noise in rural Ontario on May 31st, 2017 evening news.  See Global’s story, with video clips here,  and watch the news broadcast on Global TV News this evening starting at 5:30 PM.

Global’s national news investigative team began working on this story months ago, after receiving documents from Wind Concerns Ontario (WCO) which reveal an astonishing 3,180 wind turbine noise complaints were made by rural Ontario residents between 2006 and 2014.  The Global investigation takes a close look at the Province’s response to those complaints.  The documents from WCO show that in 54 per cent of all cases – more than 1,700 individual complaints – the Ministry of the Environment and Climate Change (MOECC), the agency responsible for oversight of wind turbine noise, did not investigate residents’ concerns. In another 450 cases, roughly 14 per cent of total incidents, the ministry deferred responding to complaints.

This news story hits close to home for County residents.  If the REA-approved nine turbines remaining in the White Pines Wind Project were to proceed almost 200 homes and an estimated 500 residents in Milford and surrounding area would be located within 1500 metres of one or more wind turbines.

Jane Wilson, WCO President, says that WCO “is hopeful that the Global News story will be a step forward in getting the Ontario government to acknowledge that there is a problem with the siting of wind turbines in this province and will take steps to help people, now.”

A WCO news release on the Global story and a link to a report on the information WCO received from the MOECC after a two year struggle to obtain it, can be found on the WCO website  .

Liz Driver and Edwin Rowse of APPEC and PEHAC (Prince Edward Heritage Advisory Committee) have been working to protect something they love and are passionate about: Prince Edward County heritage landscape and designated heritage properties. They have had a professional produce a video to accurately simulate important heritage views that the proposed White Pines Wind Project wind turbines will impact. To read a short article and view the video, please go to this Wellington Times link.

Here is a youtube video and very catchy song with powerful lyrics and message about the Ontario government’s push to industrialize rural Ontario with giant industrial wind turbines to the dismay of local municipalities, residences and citizens.

While the video focuses in on the CAW Wind Energy Project, the message can be applied to most rural areas in Ontario where wind projects have been approved by the Ontario government. It can equally apply to local residences with expert environmentalists and health care individuals who are Standing Up by financing Environmental Review Tribunal (ERT) appeals against our own Ontario government who are siding with the big wind industry to put our health, our environment and the future of our children at risk.

The video starts with a message ….

“We the People of Ontario are currently fighting for our Nature, our Health, our Homes, and our Children’s future Against our own Government and Companies who have lots of financial resources.”

No Visual Impact Assessment? No problem.

You have to hand it to wpd for dealing with visual effects of their “White Pines” wind project in one sentence.  In their Project Description report, under “potential adverse effects”, wpd notes the following concern: “Disruption to the local viewscape from siting of project infrastructure”.  A column over, under “mitigation strategy” wpd notes that: “Turbines will be visible in the viewshed, although the scale of the turbines will not likely be invasive.”

Wpd is stating the obvious when they say that “turbines will be visible in the viewshed.”  How could turbines even higher than the “London Eye”, the giant ferris wheel that dominates London’s skyline, not be visible in the viewshed?   In good weather conditions wind turbines are visible up to 25 kilometres away.  On a clear day the wind turbines on Wolfe Island are visible from certain vantage points in the County and those are 40 kilometres away.

According to wpd the scale of the turbines “will not likely be invasive”.  But wpd is surely being evasive here as well.   An assessment of visual effects involves more than a wind developers’ impression of the scale of its own turbines.   Whether or not wind turbines with rotors long enough to comfortably fit a Boeing 747 are invasive is beside the point anyway.  The point is how these turbines will dominate in the landscape and change the sight of the nearest surroundings in a fundamental way.

In order to understand how wpd’s turbines will dominate the landscape we need to consider not only the scale of the wind turbines but other factors as well.  Wind turbines are not just dominant features in the landscape because of their sheer size.

One of the major factors is the vastness of the area the project occupies in terms of the parameters of PrinceEdwardCounty.  wpd’s 29 turbines are spread out over 105 square kilometers.  The wind project utilizes virtually all of the County’s SouthShore.  Spreading turbines out in this way has left wpd with plenty of room for infilling and more turbines are to be expected.  As wpd says: “As a developer, if additional options were available, we would pursue them as would any other developer.”

Turbines tend to be more prominent in the landscape when the project layout is disordered and chaotic.  One of the basic tenets of siting turbines is to locate them in a way that does not appear confusing in relation to the character of the landscape.  wpd opts to ignore the advice of experts, choosing instead to site their turbines in helter-skelter fashion.   Former APPEC board member Henri Garand notes that wpd’s “irregular scattering of turbines competes with a pastoral and heritage landscape like PrinceEdwardCounty’s.”

The overall character of the landscape and its sensitivity to wind turbine development is yet another factor in how prominent wind turbines will be.  Because the turbines are so spread out, they will be visible from multiple vantage points across the ward of South Marysburgh and part of Athol.  Local heritage advocate Liz Driver has identified some of the significant views reflecting the character of the landscape: the steeple and the grounds of Mount Tabor looking southward over forested hills, the open fields and heritage buildings including the Cheese Factory along Royal Road to the north and south, the string of historic buildings along County Road 13 seen from the water on South Bay and the historic buildings of Milford and Bond Roads with views southward.    As Driver points out, “the aesthetics of industrial-scale, pre-fabricated, metal turbines is incompatible with the aesthetics of early to mid-19th century buildings that show a craftsman’s hand, and the small-scale relationships of buildings and landscapes.”[ii]

According to a commissioned report for Scottish Natural Heritage, there is universal acknowledgement that the potential landscape and visual effects are among the most important and to some extent the most intractable issues in locating wind projects.   But clearly this has not been universally acknowledged:  the Ontario government has never acknowledged the importance of potential landscape and visual effects.  It cannot even be said that the Ontario government has passed off accountability for these issues to wind developers: Ontario’s Renewable Energy Approval process does not require Visual Impact Assessments.  As noted at the beginning of this article, a sentence or two on this by wpd will be enough to get Ontario government approval.

[i] Henri Garand, “Machine or Sculpture in the Garden”, Sept. 18’13 appec@wordpress.com

Article – Oct 25, 2013 – Why preserving the view in Canada is not just tilting at windmills

In Prince Edward County, I always feel like I’m in a painting come to life.

Cheesy? Sure. But whether it’s the ethereal quality of light across the fields, the rustic shops and wineries or the sunset views over Lake Ontario, something in this bucolic little region about halfway between Toronto and Ottawa makes it easy to imagine myself daubed into a familiar pastoral landscape, one remembered from a million postcards, textbooks and magazines. It’s the same feeling, I suppose, that brings a steady flow of plaid-clad urban defectors here, looking to re-imagine themselves as one of the County’s local artisans.  Continue reading